Go-Ahead’s passenger transport services play a vital role in connecting communities via road and rail. It is the largest bus operator in London and its regional bus services account for 11% of the wider UK market. It operates the busiest rail franchise in the UK – GTR – as well as holding international rail contracts in Norway and Germany.

But Go-Ahead’s commitments extend far beyond delivering efficient, safe and affordable public transport. Sustainability has risen to the top of the agenda. In 2019 the group released its Sustainable Procurement Charter, a list of measures to make impactful contributions to climate change and to deliver greater value to all of its stakeholders.

“That charter was our first deep dive into the sustainability agenda,” says Glyn Watts, Group Head of Procurement at Go-Ahead. “We recognised that, whilst we thought we were good at sustainability in the past, we actually weren’t that mature in our approach.”

Despite the added pressures and challenges brought on by the COVID-19 pandemic, Go-Ahead’s ambitions in sustainability and diversity have developed further in the intervening two years, with a target to be a net zero business by 2045. “Since the sustainability charter we have released the climate change strategy, which directs us in where we are heading as a business,” Watts says. “And this has been followed more recently by our SME strategy.”

Though a group-wide effort, the procurement function is a key enabler in these initiatives. Take, for instance, Go-Ahead’s most prominent asset: vehicles. In one regional transport service, the function procured a new type of bus with a specialised filter that cleans the air as it drives around the city. The company is in discussions for what has the potential to be the largest hydrogen bus order in the UK. These are the nascent stages of an overhaul of the auxiliary fleet as it moves towards sustainable fuels or electrification, and a vital step for the transport operator. However, procurement’s role goes beyond the directly passenger-facing facets of the business.

“Every new tender is an opportunity to reconsider how we do that business,” says Watts. "So even the routine and the mundane, we’ll ask if there is a new way of doing it, or whether we even need that requirement anymore. Our ethos is to invite market entrants in for a discussion before we run a tender. It’s so important to do early market engagement, discover who else is out there, who's doing things differently, who’s innovative and, ultimately, who could bring some value to our operation.”

The results have been surprising but enormously impactful. The first tender Go-Ahead ran under the new sustainability charter was for new ticket vending machines for one of its rail operations. Whilst the tender was ultimately cancelled due to a change in circumstances, it was worth noting that the supplier that came out on top commercially required the largest initial outlay and some of the more expensive service costs, which seems counterintuitive. But this assessment belied the long-term value.

“If we'd run that tender several years ago, the supplier with the lowest up front and long-term service cost would have won the commercial section,” Watts says. "However, this time around we took into account energy consumption, and actually the supplier with the highest initial outlay but the lowest energy costs nudged ahead as a result of their energy efficiency. It is really great when that happens. It shows suppliers the value of investing in energy efficiency and demonstrates the value procurement can have in understanding the true financial and environmental cost of a product or service.”

It is a marriage of both commercial and sustainable capability - and a positive trend illustrating how Go-Ahead is rethinking its relationships with suppliers to deliver greater value. A further example Watts highlights is APCOA Parking, a key supplier for Go-Ahead’s car parking provisions. Watts places the annual income from parking at between £40-50m, a substantial contract by any measure. But the use of car parks has changed. More passengers cycle as part of their commute, they require lockers, or they may benefit from a car washing service. In addition, the company wanted to think of ways to incentivise electric or hybrid vehicles through the charging structure over more polluting alternatives.

“APCOA was bristling with these sorts of ideas, and ways to make these spaces more sustainable. And with that in mind, we were no longer looking for a good debt collection company, or even a supplier primarily focused on parking,” Watts says. “The result is we now have a partner in APCOA with which we can develop those ideas over a number of years. They were successful largely because of the amount of ideas they had, and how well they can develop those, particularly in the sustainability space where they have strong partners in electrical vehicle charging.”

This mindset to balance innovation and cost has been codified in Go-Ahead’s recently published SME Strategy. With a roadmap of tenders published well in advance, Watts aims to give resource-limited SMEs the time they need to prepare and meet Go-Ahead’s requirements, rather than being muscled out by market leading competitors that have the ability to throw resources at an issue at short notice.

“Secondly, and probably more importantly, we're identifying SME-spend-only categories,” Watts says. “These are smaller categories of spend where we may currently use a big provider, but if there's a quality market there for SMEs, we're going to commit 100% of the time to using SMEs. As long as the safety risks are understood, we’re going to get the quality we need, and there are no other issues, we're going to have a blanket policy that they have to be SMEs. There’s still work to do there, but we think it could have a big impact.”

This is not “spend for the sake of it”, however, says Watts. “We're not just doing it for reputation; we strongly believe it supports our corporate strategy. If we're going to develop for the future of transport, we need to be looking at innovative step-change technologies, which often come out of left field and sometimes not from our industry.”

Watts admits that these ambitions require dedication and hard work. Transformation at this scale is difficult, but Watts says the support from stakeholders is making the process a success.

“I think everyone enjoys having an impact beyond cost and time,” adds Watts. "They are essential to the business of course, but it’s rewarding for procurement professionals and our stakeholders to think about other factors and drive positive change through elevating our sustainability priorities in the procurement process.”

Go-Ahead has come a long way in just a short period of time, but Watts believes the rate of change will accelerate even faster in the coming 12 to 18 months.

“I like to think we would be much further along the road in our climate change strategy. One of the key pillars there is waste reduction and recycling targets. We’re currently running trials at Brighton Station and bus depots to find out the best way to achieve 90%+ recycling on a small scale, and then how to expand in a way that is commercially viable.

“I'd also like to think we will be pulling more innovation from our supply chain. We're running a bus supply chain challenge across all of our existing suppliers. We’re asking, ‘What can you do for us?’ It could be on cost operations. It could be customer experience. It could be to do with the environment and climate change. I like to think that asking these questions will provide us with some strong results, but at the very least put our suppliers on notice that we are listening and we have an appetite for experimentation and change.” 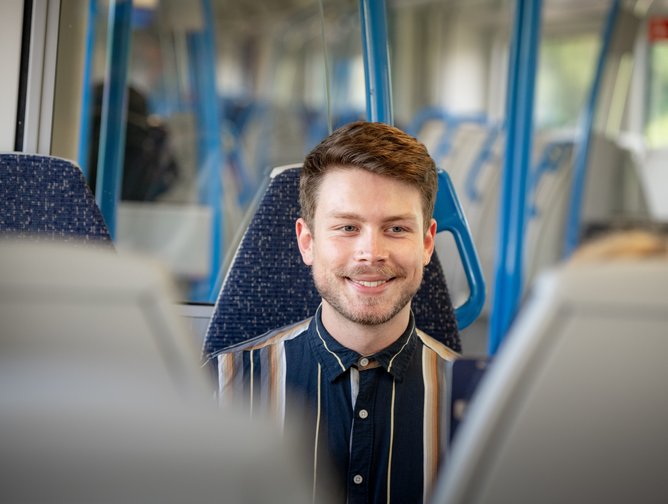