Based in Houston, Texas, Vantage Drilling is one of the most effective players in that specialized niche of the oil & gas business: offshore drilling. Offshore operations are generally not as easy as onshore or littoral operations – major, national and independent oil and natural gas companies require a dependable partner to carry this out. Vantage has five ultra-premium jackup rigs capable of operating in up to 375ft of water and drilling to depths of 30,000ft. It also has three ultra-deep-water dynamically positioned drillships designed to operate in water depths down to 12,000ft and drill to 40,000ft.

It’s no secret that the entire oil & gas sector is on a slow climb back from its boom days. According to the industry analyst Rystad, offshore drilling in particular may not fully recover till 2027. This has affected drilling contractors like Vantage in a number of ways, says its Director of Supply Chain Andy Poosuthasee. The most notable of these is that where the norm used to be longer term, multi-year contracts, these days contract terms are often counted in months. This in turn means that the company’s assets have to be moved much more frequently than before.

From a supply chain point of view frequent movements call for a greater degree of maturity, says Poosuthasee. “Probably the major challenge we face currently is that our rigs don’t tend to spend a lot of time in one particular country – we're jumping around to different locations,” he explains. With seven of its eight rigs under contract Vantage is doing a lot better than its peers – the industry average is around 61% utilization, and there’s no lack of rigs waiting to come out of shipyards to further dilute that percentage. Still, the brevity of contract duration that is the price for high utilization is a supply chain challenge. “Even if we are working in the same country, the agreements these operators have with us and with the country itself are different. Looking ahead, I think we will be seeing more rather than fewer movements and that means that we have to be very nimble from a supply chain perspective.”

A fact of life for Vantage is that much of its business is conducted in countries that occupy the bottom 30 percentile of the Corruption Perceptions Index. “This brings in a whole new level of compliance and complexity into the supply chain organization where we must absolutely comply with transparency and anti-bribery legislation such as FCPA (US). If you are working in places like the Gulf of Mexico or Canada it is simple enough to organize a compliant and predictable supply chain, but in other locations such as in West Africa, customs procedures are more complicated, fickle and constantly changing. In addition, countries that are highly dependent on oil are even more so severely affected in the downturn, which has a knock-on effect of potential added corruption. That has affected our supply chain strategy tremendously. We will obviously comply with the anti-corruption laws and have no tolerance for any deviation. Recognizing that import clearance times may be measured in months rather than days, a rethink of strategic sourcing and inventory management strategies is called for,” he adds.

Poosuthasee is not daunted by such difficulties though. As a certified lean sensei from his earlier experience with the oil & gas services company Halliburton, he looks on both the general downturn, and the rise in corruption that in part comes out of that, as opportunities for refining best practices. “In the good times, companies tend to stagnate and the focus was more topline driven for offshore drillers. I actually think the downturn has been a good thing because it forced offshore drilling contractors to find ways to be more effective, especially within their supply chain. Consequently, supply chain has become more important than it used to be in the past. I believe most companies (especially large ones) don’t take the total cost of ownership into account because it is difficult to calculate especially when they may be working in silos. For example, strategic procurement may be negotiating global/regional fixed price agreements, but not considering the import duties (which in some countries can be up to 30% of the purchase value), customs clearance times, freight, and inventory impact because that’s managed by other departments within supply chain.”

When moving into a new country, the first task is for the procurement and logistics team to go in, find local suppliers and set up a local supply chain. “In challenging countries, where it is very difficult to import, our strategy is to source as much as possible locally. We have seen tremendous benefits from that exercise.” These benefits include a significant reduction in lead times, eliminating exposure to import duties (which can be as much as 30%) and customs fines, and enabling leaner inventories. In just three years, he adds, Vantage’s local content in all categories went from 33.2% to 56.7%, while in the same period lead times were cut by nearly 40%. Another benefit of local sourcing is that it grows the local economy, coupled with the fact that many countries require foreign operators to maximize local sourcing.

Any supply chain organization adds value to operations through quality delivery and pricing – in that order of importance, Poosuthasee believes. “We won't sacrifice quality or compliance in order to get something quicker and we won’t sacrifice meeting our internal customer’s operations delivery requirements just because it's going to save us some money,” he says. “One of the biggest benefits we see is that when you source locally you don't have to deal with trade compliance issues, importation delays or potential ‘penalties’ and ‘fines’. Countries that are heavily dependent on oil and gas especially are constantly changing their import/export requirements. Therefore, the potential for significant fines or penalties by local customs is there if you are not diligent and focused on trade compliance. Of course among local suppliers, there is also a level of corruption so you must spend a lot of time auditing them and doing due diligence to ensure compliance with the FCPA.”

Vantage now has a mature process for moving into a new market. Its Rig Move Checklist covers 30 logistics actions and 29 supply chain and procurement actions that are done before the rig moves to its new location. “We are very confident with the process because we have successfully used it so many times before,” he asserts. “I think taking the time to complete these 59 actions in advance is one reason we’ve had such success as we go into new countries. Of course, close liaison with the operations team is very important: they are our customer so we spend a lot of time communicating with them to ensure we cover all of their needs prior to the rig’s arrival.”

Tech tools for the times

The priority for Vantage has been to identify cost effective rather than big ticket solutions to deliver automation, data management and reporting in the areas of procurement and inventory management as well as other parts of the business, such as maintenance and engineering. This is no time for heavy investment in this industry, and Vantage’s supply chain team discovered inexpensive, cloud-based solutions at a fraction of the price of managed software to be the answer. One implemented cloud-based solution has proven to be a collaborative and work management platform with a relatively straightforward user interface. “It is a tremendous tool that has allowed us to eliminate many of our manual processes. The downturn has meant doing the same job with fewer people but we have not seen a degradation in the service that we provide. That’s because we have been able to automate many of our manual processes through the use of simple and really economical applications.”

As a lean six sigma practitioner, Poosuthasee asserts: “One of the hardest things to do is to eliminate a piece of paper from the process.” Even so, a lot of paper processes have been automated by transferring them to this intuitive cloud based system. It’s clear though that he sets more store by the attitudes and commitment people bring to their task than the methodology. “I’ve learnt a lot from mistakes I have made in the past. One of the biggest ones was chasing too many initiatives, too many strategic goals. Now I tell my team to focus on what Franklin Covey calls the wildly important goals; focus on less so that your team can achieve more.”

In furtherance of this principle, which Poosuthasee also characterizes as going “an inch wide but a mile deep”, the supply chain team is focusing this year on trade compliance, both to minimize the risks thrown up by different customs regimes and to further automate procurement systems and processes.

A partner in the enterprise

When Poosuthasee joined Vantage in 2013, the company was still in “start-up” mode, and supply chain was doing a good job, but more as a support function. Since joining, he has worked to build the organization in three phases. The first phase was to strengthen the foundations and streamline the processes to be as effective as possible; the second was to start demonstrating and adding value to the company. “I wanted to show that we could actively impact KPIs and other value-added activities such as on-time delivery, quality, local sourcing, negotiations and inventory management. Show the company we can do more than just transactional tasks such as issuing POs.” Phase three was to become a true partner in the business, being asked to support non-traditional supply chain tasks such as sourcing service personnel and labor, real estate, catering, auditing, compliance, and even marketing right from the bidding stage. “It was truly pleasing from my viewpoint to see us moving from being a support team to being asked for advice on things we weren't involved with in the past and becoming a true partner in the organization.”

Andy Poosuthasee and his supply chain team are certainly finding ways to add value. Even some relatively mature locations have seen some dramatic results. For example, trade compliance turned out to be a big issue in Indonesia where even airfreight imports were taking a fortnight to clear. By developing local suppliers Vantage went from sourcing 47% to 81% locally. A different challenge faced the company in Qatar following the imposition of sanctions by GCC countries from which most supplies had previously been sourced. In just a couple of years, local suppliers have been brought on, at first being given short contracts but more recently these have been extended and today, he says, it is one of the easiest locations, with more than 80% locally sourced. 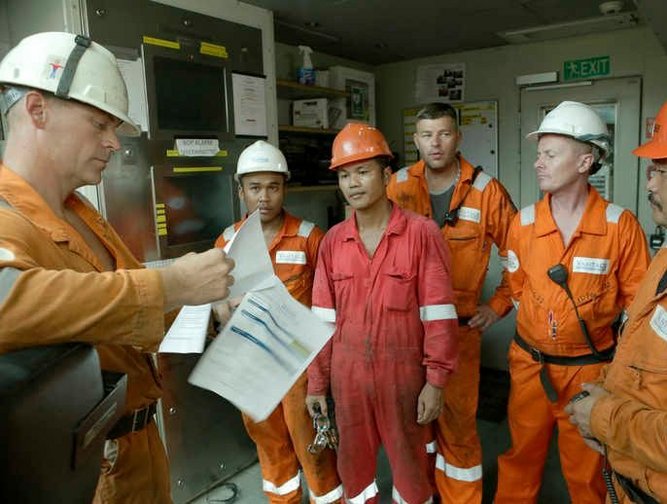 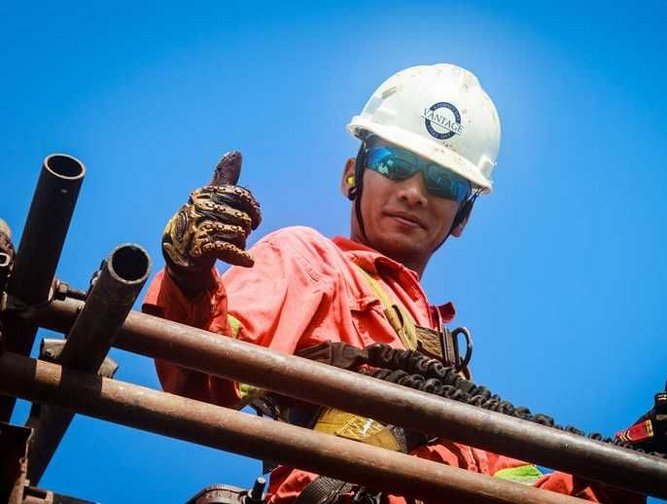 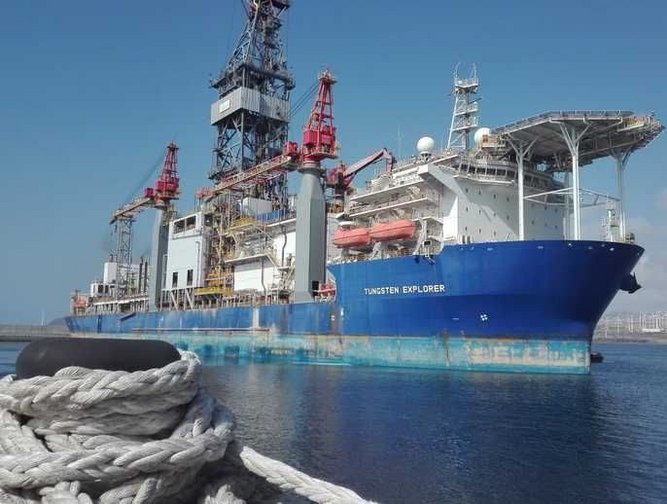