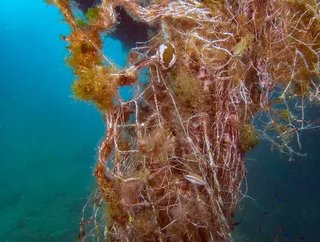 The organisation has gained 10 major seafood producers to address the growing problems within the industry of ghost gear making its way into our oceans...

Ten of the world’s biggest seafood producers have collected together to form the Global Ghost Gear Initiative (CGGI), to aid in the fight against ghost gear in our oceans. 640,000 tonnes of fishing equipment end up in our oceans each year and, together with scientists, the public sector and businesses, the collective will look to reduce the fishing gear that makes up over 46% of our oceanic pollution. Ghost gear is the term given to abandoned fishing gear that constitutes a large portion of the oceanic debris.

The collective was established by the World Animal Protection Project in 2015 and includes Cargill and Thai Union as its largest signatories. The initiative aims to tackle the growing problem with fishing nets, crabbing pots, lines and buoys left abandoned in the ocean.

The environmental impact of ghost gear has been increasing and has been found to cause the loss of 5-30% of fish stocks, depending on the size, location and type of the fishery. This causes a reduction in the resources available to the public while driving up the prices that consumers are expected to pay, with prices expected to increase by as much as 25% by 2030, according to The Food and Agriculture Organisation of the United Nations.

The CGGI’s organisations have committed to supporting 30 different projects to alleviate the problems from ghost gear by 2025.

“This announcement sends perhaps the strongest message yet that the global seafood industry is recognising the severe threat that ghost gear poses and is increasingly committed to tackling the problem in its supply chains,” Ingrid Giskes, GGGI’s director, explained.

One year ago, the GGGI pledged to double the amount of funding they were dedicating to projects aimed specifically at tackling ghost gear, particularly in developing countries where populations rely on a consistent stock of fish in the oceans around them. The promise would see the fund raising a contribution of $2mn across the organisation.