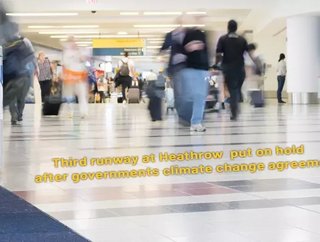 The UK Court of Appeal has ruled that the proposed third runway at Heathrow airport, London is illegal on the basis that it will flout the government...

The UK Court of Appeal has ruled that the proposed third runway at Heathrow airport, London is illegal on the basis that it will flout the government’s climate change agreements.

Of the decision, a Heathrow spokesperson said:

“The Court of Appeal dismissed all appeals against the government - including on ‘noise’ and ‘air quality’ - apart from one which is eminently fixable. We will appeal to the Supreme Court on this one issue and are confident that we will be successful. In the meantime, we are ready to work with the Government to fix the issue that the court has raised.

“Heathrow has taken a lead in getting the UK aviation sector to commit to a plan to get to Net Zero emissions by 2050, in line with the Paris Accord. Expanding Heathrow, Britain’s biggest port and only hub, is essential to achieving the Prime Minister’s vision of Global Britain. We will get it done the right way, without jeopardising the planet’s future. Let’s get Heathrow done.”

The decision is being hailed as a victory for environmental groups who have long opposed the airport’s expansion, while the airport itself attempts to solidify its claim that the expansion is both necessary and capable of being accomplished sustainably.

On 20 February, the airport released a press release stating that it is targeting carbon neutrality by the mid 2030s, adding that emissions from its operations have already been reduced by over 90%.

It said that its efforts, including £100mn already spent on decarbonisation and an additional £1.8mn set for piloting the UK’s first natural carbon capture projects this year, will extend to industry-wide strategies on the road to net-zero by 2050.

“Making our infrastructure entirely carbon neutral is a significant milestone and a testament to the determination of our airport to help spearhead a new era of sustainable aviation,” said John Holland-Kaye, Chief Executive at Heathrow, in its statement on the matter.

“Our sights are now set on working with the global aviation industry to deliver on net-zero by 2050, at the latest. We can and will cut the environmental cost of flying whilst keeping the benefits of travel for future generations.”

On the 25 February, Heathrow also announced that it had recorded growth in 2019, extending its streak to nine years. In its respective press release, it made mention of the expansion and its capacity for job creation and economic prosperity whilst cementing Heathrow’s position as a global transport hub. This, it said, is in the face of the growth of France’s Charles de Gaulle airport which resultantly threatens to overtake Heathrow’s scale.