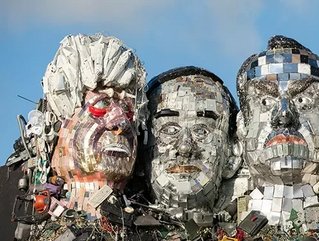 The world awaits the 47th G7 summit conference, which will take place in Cornwall, United Kingdom, this weekend. A beach near Carbis Bay, where the conference will take place, is now home to a sculpture representing the summit leaders - appropriately named ‘Mount Recyclemore’. Based on the famous Mount Rushmore, the sculpture depicts the world leaders who will make their way to the seaside town this weekend, including British Prime Minister Boris Johnson, United States President Joe Biden and, German Chancellor Angela Merkel.

The sculpture was commissioned by the used technology ‘recommerce’ company, Music Magpie, and was built entirely of electronics waste. The aim of the sculpture is to highlight important discoveries surrounding the amount of e-waste among G7 nations. Research has shown that nearly 15.9 million tonnes of e-waste come from those countries each year:

The research also highlights that the UK produced 23.9kg of e-waste per capita in 2019, which is the second-highest figure in the world. Research by the United Nations (UN) shows the current global annual e-waste figure at around 53 million tonnes.

What is the G7 Summit?

The Group of Seven (G7) is made up of the largest economies in the world. This includes Canada, France, Germany, Italy, Japan, the United Kingdom, and the United States. The conference is set to take place in Cornwall this year, as it is seen as central to the UK’s green technology sector. The main topic for discussion at this conference will involve discussions about the global healthcare system and future pandemic planning.

According to Music Magpie, there is a high level of urgency to act upon e-waste figures, as it reports that the British population is currently in possession of £16.5bn worth of unused technology - averaging around 11 unused devices per household. Some other research has been carried out by Music Magpie, which highlights some very alarming statistics:

According to Steve Oliver, founder and CEO of Music Magpie, “e-waste is a growing problem worldwide, and its impact on the environment is significant. If sent to landfills, e-waste can leak harmful chemicals into the soil and water or if incinerated, fumes release chemicals into the air, contributing to global warming.”

“Not only this, but everything from our phones to our laptops rely heavily on precious materials to operate, which are not only limited resources but also directly impact climate change when being extracted from the earth.”

Oliver concludes by saying, “We need to better educate and empower people to make changes today. People can support a more sustainable, circular economy by doing something as simple as trading in or recycling their tech, which will extend the life of those devices and their parts. Thanks to our customers, we are already able to give nearly half a million consumer technology products a second life each year.”

The Beginning Of An e-Waste Partnership

As a result of the research and the erection of Mount Recyclemore, Music Magpie is now working with WasteAid, a global waste management charity, to provide incentives to consumers to recycle, reuse or donate their technology. The charity will be given £1 for each piece of technology that customers trade-in with Music Magpie. Consumers will also be given the option to donate the trade-in value to WasteAid.

Ceris Turner-Bailes, CEO of WasteAid, says, “We hope Mount Recyclemore will bring awareness and demonstrate the impact of waste on the environment to the wider public.” Bailes continues, “Helping communities and governments manage their waste properly is vital if we are to tackle climate change and reduce damage to the environment. This partnership with musicMagpie will support global education and training programmes on e-waste management and circular systems.”