View Full Report
‘Reinventing the wheel’ has been a great motivation for GACW. The company’s Air Suspension Wheels reach optimum levels of performance and last for decades

Global Air Cylinder Wheels (GACW) is a company driven by a steel will to transform the mining industry through its pioneering Air Suspension Wheels. Its emergence in the industry is a response to a conundrum which has remained unsolved for decades – how do you reinvent the wheel?

Mining is almost as old as time itself and while the industry has moved with the times, some things have remained the same. For the wheels typically used in global mining operations, time has stood still. Even in the digital era, wheels have remained strangely, almost defiantly, antiquated.

Too often sophisticated mining operations have persevered with the old-fashioned inflatable tyres. These have been prone to combustion, skidding, blowouts and lateral sway, while also being completely unsustainable, impossible to dispose of and responsible for polluting oceans throughout the world. Indeed, a study published in the International Journal of Environmental Research and Public Health, estimated that tyres account for as much as 10% of overall microplastic waste in the world’s oceans.

In contrast, Air Suspension Wheels (ASW) use a complex combination of long-lasting steel, inwheel suspension, pneumatic wizardry, energy efficiency and replaceable treads to optimise performance and provide mining systems – from gold to coal – with ultra modern reliability and, mercifully, a vital venture into corporate sustainability. It is indisputable proof that change is happening and it concerns the one thing that should keep businesses moving (but so often does the opposite).

President & CEO of GACW, Zoltan Kemeny, is the visionary behind ASW, but also a mining luminary who has been determined to evolve an element of the industry which had stalled for decades.

“I saw the tyres as the weak link in the critical interface,” reflects Zoltan. “When the existing rubber hits the road or the terrain, you run the risk of flat tyres, fire and damage from repeated use. I thought, there's got to be a better way – these wheels must be designed with the same precision as the vehicle itself, with a metallic structure, reactive suspension and mechanical parts. The identification of that weakness became an inspiration at first, and then an obsession.”

Highly qualified in the field of engineering, Zoltan has used all his experience and knowledge of mining to create a dynamic wheel which works in tandem with other machinery and, critically, the environment in which it operates.

Clearly the most important plot point on the ASW journey is the elimination of the inflated tyre – a burden which would not be able to survive in the modern mining ecosystem. For centuries, repeatedly pumping up and patching up beaten up old tyres has been the unsustainable sticking plaster on the mining industry, frequently bringing operations to a grinding halt, wasting valuable time and creating economic problems in the process.

By replacing the traditional design with a predominantly metallic structure – which has steel walls, easily replaceable rubber gripping tracks and suspension under the chassis – the wheels represent a fully integrated solution, allowing free-flowing mining projects without hazardous over-reliance on old technology. It is a gateway to the future and a message to the wider world about the positive motivations of mining businesses.

When Zoltan started forming the blueprint for ASW he was well aware of the old adage about the ‘pointless reinvention of an existing idea’ but his response is progressive rather than restrictive: “People say, ‘oh you’re reinventing the wheel’ but that’s just thinking inside a box – you have to look beyond that. Yes, the wheel is already invented, but is it always perfect? No – there are certain areas where the wheel is far from perfect, particularly in the military, forestry construction and, of course, the mining industry.”

“The rubber tyre can so easily be damaged, by fire or just with a knife. If you have a steel wheel, which operates the same way, then it is impossible to do that. With ASW you can ride over an IED in a war, or an explosive, and still keep running,” adds Zoltan.

It is this robust approach, attention to detail and focus on design which is taking GACW into the next stage of development.

Wheels of your mind

When it came to testing the new wheels GACW had a rather novel approach, starting with small vehicles and gradually moving on to monster machines. It started with the humble wheelchair, before progressing to an SUV and then the giant trucks.

Sales SVP at GACW, Harmen Van Kamp, who became Zoltan’s indispensable right hand, strategic partner, and friend from the get go, knows the potential of taking ASW to the next level, including improving their impact on the sacred arena of sustainability: “Tyres are by far the least innovated part of mining, but they’re also considered the biggest issue – environmentally, it's the most negative aspect of mining. There are many campaign groups that have identified tyre problems and are urging improvements on mining sites.”

“Controlling the vehicle is also one of the most dangerous jobs on the mine site, so reactions to ASW from a safety perspective have been really positive,” adds Harmen.

In terms of the disposal of rubber tyres, the process over the last couple of centuries has been far from sophisticated. “You can't really scrap them,” says Harmen. “The only way to get rid of them is to dig a big hole and throw them in there. It then takes about 150 years for disintegration to take place.”

It is this kind of statistic which puts mining under the microscope. The launch of ASW, however, has also coincided with mining companies needing to boost their green credentials – essentially future-proofing an ancient industry for the next generation. GACW has been explicitly told by organisations that, as part of their lower emission goals, they need to be more responsible when it comes to wheel usage. After all, there is only one thing better than recycling wheels and that is not having to recycle them at all.

“A lot of mining operations want to slash their CO2 emissions by 50-60% by 2030 and the use of ASW is going to become a big part of that,” notes Harmen.

During the long journey from conception to roll out, mining equipment will reach the hallowed ground of ‘technology readiness level’. During trials in South Africa, the ASW successfully reached the proof of concept stage, as the wheels excelled in the fields of durability, versatility and performance. It also convinced Zoltan and Harmen that the ‘crazy’ idea of replacing the rubber tyre could become a stark reality.

Following the initial trial, GACW moved on to the United States – it was crunch time for the ASW as it faced its most demanding tests. “In America we have been going through rounds of much more destructive testing, pushing the wheels to their very limits,” reflects Harmen. “Along the way, we have been making final minor improvements, resulting in the best wheel we can possibly produce.”

Getting the most formidable wheel made is something GACW will not cut corners on, and that means investing heavily in collaboration. “We team up with strong partners, because at our heart we are an engineering firm,” insists Harmen. “We are proudly working with the best cylinder manufacturer, the best wheel manufacturer and the best compound manufacturer. These entities combine to deliver the best wheel possible – a wheel that can fundamentally change how organisations approach mining.”

GACW currently has the potential to produce hundreds of wheels every year, while its manufacturing partner has 18 facilities all over the world, allowing for significant global distribution.

The use of ASW is also a bespoke solution and the company is keen to work with clients to meet their exact mining specifications. “We're not limited to an off-the-shelf solution,” concludes Zoltan. “We ask the client what their specific challenge is and by working together we create a solution. Historically a company would choose a rubber tyre and build the vehicle around it. With ASW we can do the opposite by taking the existing vehicle and integrating a made to measure wheel. Subsequently, this method opens up many more possibilities.”

The brand of forward-thinking epitomised by ASW is certainly drawing the attention of tier one global mining companies whose commitment to tech and modern solutions is growing exponentially. Many have even included the embracing of innovation within new mission statements. It's become a pivotal exercise for companies to implement new technology on a mine site, then throughout a country, ultimately resulting in global rollouts.

With this in mind, ASW is set to make a seismic impact on mining operations across all continents, taking the industry into unchartered territory and yielding new opportunities in the search for sustainability. The opportunities for mining companies to reboot their systems with the ASW are manifest, while the chance to engage with the public about how they operate represents a unique milestone.

The dawn of change has arrived for mining and over the coming years GACW will play a pivotal role in its transformation.
Evidently, ‘reinventing the wheel’ is possible after all. 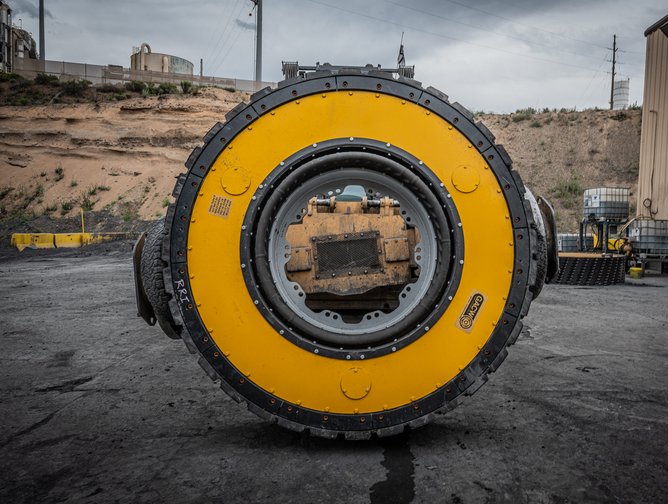