Healthcare CEOs need to cut out CO2 from their supply chain 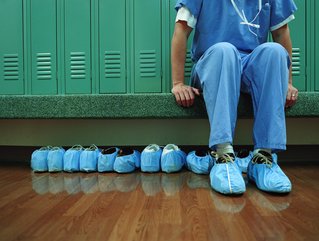 When published studies found that smoking clearly caused cancer, many physicians went from being smokers to becoming “leaders by example,” by quitting smoking and acknowledging the health hazards of the addictive habit. They helped launch a “war on smoking” after publication of the AMA’s 1972 War on Cancer report.

Today, healthcare workers should be leading the War on Climate Change by reducing greenhouse gas emissions caused by the health sector, particularly those caused by hospital supply chains (known as “Scope 3 emissions) that drive the majority of emissions that cause climate change.

The health delivery system is failing us.

Air pollution isn’t the only effect of our wasteful ways. Beginning with the advent of cheap plastic products and exacerbated by the HIV/AIDS epidemic in the early 1980’s, hospitals generate an enormous amount of medical waste. A pervasive "take-make-waste" culture drives unnecessary manufacturing that further impacts the climate crisis.

COVID-19 poured gasoline on the fire. The pandemic revealed a vulnerable healthcare supply chain that forced us to send our healthcare professionals to fight a respiratory plague with inadequate respiratory equipment and PPE. Further, current supply chain disruptions are depriving patients of medical devices urgently needed to cure disease. A lack of domestic production drove increased production in Asia, resulting in massive global shipping requirements, which, you guessed it, further impacts climate change.

A shortage of microchips is another example of deficiency in domestic production that makes the health sector an outsized cause of greenhouse gas emissions. Many devices are sold by manufacturers with a label that reads "for single use only." In fact, some manufacturers insert microchips into surgical and cardiac diagnostic devices to ensure the device will stop working after just a single use.

Under the guise of "patient safety," some medical device makers have been able to ramp up sales, and thus the volume of medical devices sold and needing to be disposed of, by forcing obsolescence into their medical devices. FDA doesn't require any device to bear a single use label. It is the manufacturer that chooses to label their device and, given that our system rewards volume based sales, manufacturers have had little incentive to make devices last longer. This adversely impacts healthcare and consumers: it is more costly, more wasteful, more polluting and, as has been revealed, leaves American healthcare vulnerable to supply chain disruptions.
We are wired to believe there can’t be a panacea to such a complex and pervasive problem.  But there is, and it’s called a Circular Economy.

The Circular Economy in healthcare

According to the Ellen MacArthur Foundation, “[A] circular economy is a systems solution framework that tackles global challenges like climate change, biodiversity loss, waste and pollution. In our current economy, we take materials from the Earth, make products from them, and eventually throw them away as waste – the process is linear. In a circular economy, by contrast, we stop waste being produced in the first place.”

What’s more, circular economy solutions are not only better for the environment, they may actually cost less. A prime example is medical device reprocessing.

FDA has cleared or approved hundreds of so-called single use devices for reprocessing, when done by regulated, commercial firms. Nearly all American hospitals are already employing regulated reprocessing programmes, but according to data from the Association of Medical Device Reprocessors, we're only doing a tiny fraction we could be. Reprocessors saved hospitals nearly US$438m in 2020, but our data indicates that we could save American hospitals another US$2.28bn, a year, if reprocessing programmes were maximised. This is based on current product offerings and so we believe, given greater product expansion, this number is conservative.
We call on healthcare providers and the government to make a shift away from "take me to waste" to toward circular economy solutions. We specifically urge government and private insurance to incentivise hospitals to: