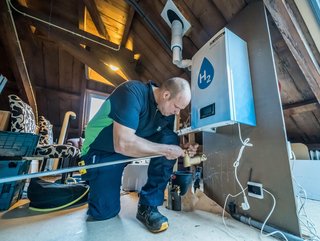 The move, unveiled in the eastern Dutch town of Lochem, is an initiative by BDR Thermea and grid operator Alliander and will go on for three years

Progress towards a hydrogen-powered future was made after home boilers, 100% powered by the chemical element and connected to an existing natural gas grid, were used to power homes for the first time in a pilot programme.

The pure hydrogen boilers are carbon neutral and were manufactured by Remeha, a brand belonging to the BDR Thermea Group and implemented by Baxi, another subsidiary of BDR Thermea.

The programme was unveiled in 12 inhabited homes in the Dutch town of Lochem. This marks the greatest scale that hydrogen home heating has ever been deployed.

Retrofitting to prove a point

Built around 1900, the homes themselves were all retrofitted with this forward-looking technology.  This was a deliberate choice, one made  to illustrate that the new heating mechanism could be installed in older housing stock which – like in this case – more often have restrictions limiting what can be done to them on account of heritage status.

The pilot  project, which Remeha did in collaboration with Dutch grid operator Alliander, is set to run for three years and will include extensive testing through the winter months, when home heating demands hit their peak.

He said in a statement: “Heating of buildings and water contributes significanty to energy use and CO2 emissions: space heating accounts for 63.6% and water heating 14.8% of EU residential energy use. Decarbonising buildings is therefore an urgent imperative, and hydrogen is one of the key technologies to do this, alongside heat networks, all-electric heat pumps and hybrid solutions that twin heat pumps with gas boilers.”

This pilot is only one piece of a wider effort on the part of Baxi and BDR Thermea.

In the UK, Baxi is participating in Hy4Heat, a government-funded initiative, which will see the manufacturer display its prototype hydrogen boilers at a demonstration in Low Thornley which is billing itself as “the UK’s first 100% hydrogen public demonstration.”