The Kennys join Bloomberg to pedal virtues of green energy 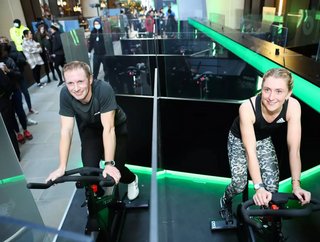 Two of Great Britain’s most decorated Olympians, Jason and Laura Kenny, have used their gold credentials to go green.

The couple joined Bloomberg – the financial data, technology and information leader – as part of the first Bloomberg PWR Ride in London.

Bloomberg Arcade became a hub for green energy creation, capture and storage. Across two days, more than 250 Bloomberg employees, clients and members of the public competed on 16 static Energym bikes to generate power, which will be converted and stored in portable Ohm batteries that can be used as a source of green energy.

The challenge took place on the site of Bloomberg’s European headquarters in the City of London – one of the world’s most sustainable office buildings. An expected 32kWh of energy will be donated to London-based charity and Bloomberg Corporate Philanthropy partner, Greenhouse Sports, to power their after-school clubs.

Laura Kenny CBE, five-time Olympic cycling champion, enthused: “It’s been brilliant here at the Bloomberg PWR Ride. I still can’t believe this kind of technology exists. It has been lovely to see Bloomberg’s staff and employees really getting behind it, as well as people passing by and having a go!

“Sport has such an incredible power to benefit lives, and plays an important role for our planet, too. We are seeing people feeling empowered to play a part in tackling climate change, while also benefitting personally through physical activity, team-building, and healthy competition, also supporting mental wellbeing,” she added.

The RE:GEN bike – developed by UK-based company Energym – is a first-of-its kind bike featuring a generator unit that transfers the energy input from a person’s workout into green electrical power, stored within a portable battery unit.

Alix Mills, Global Head of Event Marketing at Bloomberg said: “The climate emergency demands urgent action and we all have the power to make a difference. With the Bloomberg PWR Ride, we hope to demonstrate the impact that taking individual action and harnessing innovation can have on repairing our planet, while giving back to our local community.”