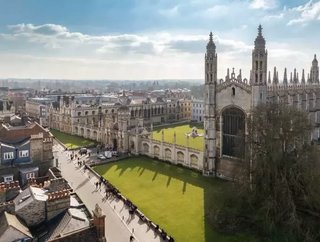 The University of Cambridge has become the first university in the world to set science-based targets to reduce its carbon footprint. The targets – w...

The University of Cambridge has become the first university in the world to set science-based targets to reduce its carbon footprint.

The targets – which have been approved to stay in line with the Paris Agreement – will see the university reduce its Scope 1 and Scope 2 emissions.

“Scientists have made it clear that we need to take urgent action to prevent potentially catastrophic climate change,” stated Professor Ian Leslie, Senior Adviser to the Vice-Chancellor at Cambridge University, with special responsibility for Environmental Sustainability.

“As a world-leading University, we need to not only take responsibility for our own carbon emissions, but also to demonstrate to others what is achievable.”

“By setting an ambitious target for carbon reduction and aiming to reach it a decade early, we hope to provide opportunities for others to learn from our approach, including where we are successful and areas that are found to be challenging.”

“The important point about Science Based Targets is that they are not arbitrary, but rather are robust and evidence-based,” noted Dr Emily Shuckburgh, Director of Research on Carbon Neutrality at the University of Cambridge.

“Achieving our commitment will undoubtedly be challenging, but it is a challenge we have a duty to meet. We encourage other universities and institutions to consider adopting similar commitments.”