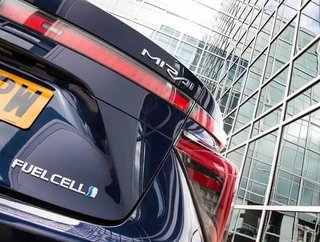 Hydrogen-powered fuel cell vehicle set to become a competitor to the battery-power as Toyota hope for revitalised interest in developing technology A n...

A newly redesigned, hydrogen-powered fuel cell sedan, was unveiled by Toyota on 10 October in an effort to reignite the interest in the sustainably powered vehicle market. Toyota is Japan’s largest automotive manufacturer and it’s been working to develop fuel-cell vehicles since 1992, but the company has met fierce competition from the battery-powered vehicle market with developers like Tesla pushing the technology into the background.

A prototype of the hydrogen fuelled sedan was revealed ahead of the Tokyo Motor Show, held on 24 October. The prototype was constructed on the same platform the company used to produce its luxury Lexus LS coupe model.

“We wanted to make a car that people really want to buy, not just because it’s an eco car,” said Yoshikazu Tanaka, chief engineer of the new hydrogen-powered fuel cell Toyota Mirai. “We wanted something that’s fun to drive,” added Tanaka.

The new model has had a sleek overhaul with a longer wheel-base to improve stability and a low-slung chassis. The previous build had a similar body work to the Prius hybrid, unveiled at the 2016 New York Auto Show.

It’s not only the aesthetic of the vehicle that has been altered, the redevelopment has seen a 30% increase in driving range. Tanaka has said the Mirai would have decreased manufacturing overheads due to a shift towards mass production, as the current model is being largely assembled by hand.

Toyota has not confirmed the price tag for the new car which is one of 3 fuel cell vehicles available to the public. The competition comes from, Hyundai Motor Co selling the Nexo, while Honda Motor Co Ltd leases out the Clarity.

Tesla’s battery-powered Model S sedan sold 25,000 units in its first year and a half, compared to the Toyota Mirai’s first outing, five years ago, which has only sold 10,000.

The reinvented Toyota Mirai will be available in Japan, North America and Europe next year.