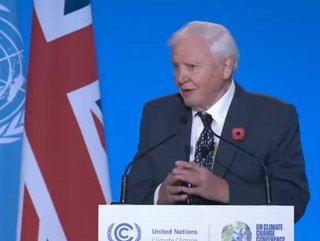 We can all share in the benefits of affordable clean energy, healthy air and having enough food to sustain us all, Sir David Attenborough told 120 world leaders on the opening day of COP26.

"A new industrial revolution powered by millions of sustainable innovations is essential and is indeed already beginning," he said.

But he underlined that we are already in trouble through the burning of fossil fuels, our approach to industry construction and releasing carbon into the atmosphere at an unprecedented pace and scale.

Striking a similarly forceful tone at the opening ceremony, UK Prime Minister Boris Johnson said: "While COP26 will not be the end of climate change, it can and it must mark the beginning of the end."

US President Joe Biden said there is an "incredible opportunity" to develop clean energy and lower energy prices, by increasing credits for electric vehicles, expanding solar and wind technologies, and cutting methane production.

The US, which has committed to dropping emissions by 52% by 2030, aims to cut GHG by over a Giga-tonne, and will "announce new initiatives" in the coming days. He said it is preparing for a "short term sprint" to implement measures by 2030 and prepare for the "marathon" of hitting net zero targets.

Patricia Espinosa, Executive Secretary of UN Climate Change, said we are on track for a rise of 2.7 degrees celsius while we should be heading for the 1.5 degrees goal. "Greater ambition is required to achieve progress on all elements of the climate change agenda."

A central issue is the provision of support to developing countries, especially in relation to the goal of mobilising $100 billion annually by 2020.

For all the advances in renewables and electric mobility, 2021 is seeing a large rebound in coal and oil use. Largely for this reason, it is also seeing the second-largest annual increase in CO2 emissions in history.

But a new energy economy is coming into view, ushered forward by policy action, technology innovation and the increasing urgency of the need to tackle climate change, according to the IEA.

In this new economy, the huge market opportunity for clean technology becomes a major new area for investment and international competition, and countries and companies jostle for position in global supply chains.

"We estimate that, if the world gets on track for net zero emissions by 2050, then the annual market opportunity for manufacturers of wind turbines, solar panels, lithium-ion batteries, electrolysers and fuel cells grows tenfold to US$1.2 trillion by 2050, around 3.5-times larger than in the STEPS. These five elements alone would be larger than today’s oil industry and its associated revenues."

Investment in clean energy innovation will be vital to decarbonise areas such as heavy industry and long-distance transport that are not readily susceptible to electrification for one reason or another, and they include advanced batteries, hydrogen electrolysers, advanced biofuels, and new technologies for the capture and use of CO2, including direct air capture.

"Building these additional pillars of the new energy economy requires early and sustained investment in energy R&D and an accelerated programme of demonstration projects," it added.

Richard Smith, partner at Sandstone Law, said having watched the evolution of environmental protection laws in the UK for over 30 years, consecutive governments have typically made big statements and issued long policy documents, but then sat back and waited for the free market to slowly adapt to the demands of society.

"Think about the Rio Earth Summit in 1992. Thirty years on progress has been excruciatingly slow and look where we are now. Still only 11% of plastics are recycled and we are still burning a lot of coal," he said.

"But now is different. Now there is a climate emergency, but still we see very little regulation to force the changes we need to establish the so-called ‘green economy’ and make sure it is a genuine change and not just some convenient populist political rhetoric. As David Attenborough keeps saying: “Listen to the science”.  The next ten years are crucial."