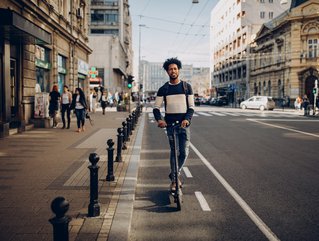 Pioneering trials of e-scooters have been taking place across the country in over 40 towns and cities, including Middlesbrough, Bristol and Hartlepool. More recently, the trials have also been unfolding in various London boroughs. It is currently illegal to own an e-scooter, but you can rent them as part of the ongoing projects.

The new mode of transport, largely designed to replace short car journeys, has been controversial with a series of incidents, foggy legal grounds and a dangerous level of speed all making bleak headlines. There has also been considerable disgruntlement over conduct, which can involve people dumping their rented scooter without due care to pedestrians.

In theory, this clean, relatively inexpensive and agile technology should reduce carbon emissions, while changing the culture of ‘getting in a car to drive 100 yards down the road’. The reality, however, has been much more complex, with some people behaving recklessly, not helped by the actual capability of some scooters. Indeed, there have already been several collisions and a toddler has been badly injured, resulting in e-scooters being dubbed ‘an urban plague’ and petitions being drawn up to ban the trials.

Many regard the impasse as a clash between imperfect technology and a stubborn addiction to driving cars. The idea, pro-environmentalist reflect, is sound, but current speeds should be reduced to 12mph, a charter for e-scooter conduct should be drawn up and, above all, people need to be educated about the damage that owning a car does, especially when its use is wholly unnecessary. Pro e-scooter organisations, meanwhile, insist that – with regulation – the two-wheelers will be as safe as bicycles.

There are dozens of e-scooters on the market and although quite a few sound like nefarious characters, models such as EMove Cruiser, Ninebot Max and Inokim OXO are deemed to be among the safest.

The use of automobiles remains one of the biggest threats to climate change, prompting many car manufacturers to invest in their electronic car output. There has still been no sign of a credible scrappage scheme in many prominent European countries, in spite of an apparent commitment to sustainability goals.